It’s a crisp winter day in Kilmacanogue, Co Wicklow, yet photographer Trevor Lee has the doors to his three-bedroom house open. “The temperature never goes below 19 degrees inside,” he says. “In fact, when the builder was doing the house, he remarked, ‘it’s a cooling underfloor system you need, not underfloor heating’.” (NOTE: See Trevor’s log house here)

There’s a very good reason for this: Trevor’s house is made of timber, and wood has natural heat-holding properties. Given their insulation abilities, wood houses have long been a staple in Scandinavia and Canada, and can easily withstand the vagaries of the Irish winter.

Perhaps it’s a throwback to our colonial history, but Irish people have long been enamoured with bricks and mortar. Yet a growing number — many of them on a modest budget or ecologically minded — are warming to the idea of living in timber houses, log cabins and ‘tiny houses’.

In the UK, the high-design concept Soho House Group has even made a selling point of timber with their latest hotel-cum-country club venture, offering visitors a chance to stay in one of their 40 luxury log cabins in the Cotswolds.

Two years ago, Trevor bought his three-bedroom log house, to be erected on an existing site. The project was started in early June, and he had moved in by August.

“By the first day they had three-quarters of the house up,” he recalls. Job done on installing LED lighting, wireless cables, flooring, kitchen units and the plumbing system, all that was left for Trevor to do, he recalls, was move in his bed.

The price was certainly a factor in his decision to forego a traditional brick house. The house itself, made from Scandinavian slow-grown pine, cost €89,000, and it cost €225,000 to complete the project from electricity and septic tank through to gravelling the driveway — almost €100,000 less than the current price of €316,000 for an average Wicklow house, according to Daft.ie. Much like a traditional house, it’s been given a builder’s guarantee of 10 years, yet is likely to last a lifetime if ventilated regularly and painted every five years.

Unlike a traditional home, though, it’s much easier to reconfigure the space — to take down one wall or erect another. The running costs of Trevor’s home clock in at around €85 a month; best of all, he doesn’t have to worry about damp or mould.

For those interested in minimalist living or low-cost housing, ‘tiny homes’ — typically between 100 and 400 sqft, and usual timber built — are now being increasingly viewed as a viable option. They are also mooted as a potential solution to Ireland’s housing crisis.

Last month, a motion was passed at a municipal meeting in Naas, calling on the Government to permit a ‘tiny house’ pilot project in the area. If given the go-ahead, the pilot project could include stand-alone ‘tiny house’ properties, as well as ‘tiny houses’ as Additional Developmental Units (ADUs) on existing properties.

“There are many benefits to having a ‘tiny home’,” says Colla McMahon of Tiny Homes Ireland (tinyhomes.ie). “Benefits include low maintenance costs, energy efficiency, being customisable, environmentally friendly, fast construction, avoidance of planning permission application (in some cases), cheap cost of construction, and being aesthetically pleasing. They have many different possible returns on investment like renting or by being taken down and resold. A basic ‘tiny home’ model that is ready to live in would cost in the region of €23,500-€31,000.

“I think a certain mentality was also instilled in the Irish people over the Celtic Tiger period,” says McMahon, “which was that a big house was meant to be a sign of prestige. The bigger the house, the bigger the sell-on value. I also remember that old Irish advertisement campaign with the slogan ‘concrete homes are better-built homes’. I think this mentality somewhat stigmatised Tiny Homes before they even came to Ireland. However, I am optimistic of this mentality changing due to the evident long-term failures of some Celtic Tiger construction projects.”

Meanwhile, Vaidas Karpavicius of Loghouse (loghouse.ie) in Rathcoole, Co Dublin, has noticed an uptick in interest in timber houses. Their products range in price from €1,500 for a single-room cabin to €100,000 for a five-bedroom home. Most people want a ‘man cave’, home office or leisure room in the back garden, but a growing number of people want to make a cabin their primary place of residence.

“This year, residential cabin sales increased by around 40pc,” he explains. “Students approach us as they want to move out from their parents but don’t have enough savings for real estate and want a log cabin at the back of their parents’ house.

“For young families, it’s a cost-effective solution,” he adds. “A two-bedroom, 60sqm log cabin, delivered and assembled, costs round €25,000 — 10 times cheaper than an average one-bed apartment in Dublin.”

Most log cabins are fire retardant and heated by wiring electric radiators, while 10L boilers deliver instant hot water. Power showers can be installed, as can wifi. And if ever the house needs to be knocked down, a wooden house is certainly more recyclable than a traditional one.

As to its durability: “We have developed these cabins especially for the Irish climate and strong nearly horizontal rain drops,” says Karpavicius. “Our cabins are fitted with damp-proof membranes as standard. We have built over 2,700 cabins so far and only one was affected by Storm Ophelia,” he adds.

So far so intriguing, yet there’s one element of the process that has proved sticky for would-be cabin owners: planning permission. While cabins up to 25sqm don’t require planning permission, it’s certainly required for bigger properties.

It’s a planning requirement that log houses should be rendered, yet most of these homeowners prefer a timber-clad finish. If a whole lane of existing houses is clad in concrete, for instance, there’s a lesser chance of securing planning permission for a wooden house there, as it could potentially affect the visual appearance of the whole lane.

A log house without a cement or concrete exterior, yet in a more isolated surrounding, might be more likely to secure planning permission.

Lars Petersson, owner of Scandinavian Homes (scanhome.ie) in Galway, says: “The fact of the matter is that almost all planning authorities are negative to log cabin-looking houses, at least in recent times. We have built 142 timber-clad houses in Ireland since 1991 but since 2006 everyone has been more or less obliged to have a plaster finish instead.

“Essentially the construction of the house is the same — a highly insulated timber frame but the cladding is different.”

For Trevor, the process of gaining planning permission was, in the main, straightforward: “When applying for planning, I approached my neighbours and they all backed me on the project without a single objection,” he recalls. “There was an issue with the outside of the house and they wanted me to plaster it, or plant big hedges. The thing that annoyed me was that not one of them came out to see what the house actually looked like.”

When asked about the potential difficulty of securing planning permission for wooden houses, a spokesperson from the Department of Housing, Planning & Local Government said: “Houses require planning permission. Therefore, planning applications for houses will be assessed by relevant planning authorities in accordance with the provisions of the relevant Development Plans or Local Area Plans for the area.

“These statutory plans may provide detailed guidance regarding layout, density, massing, height, and materials, among other things, for housing in specific areas.

“There should be no outright prohibition on particular building materials for houses applied by planning authorities, and each proposal should be assessed on its own merits.”

Meanwhile, those already living in log cabins can only wonder why the wider population has not yet fallen for their charms.

“Anyone who has ever stepped inside the house has been amazed,” says Trevor. “Not one person has walked away and said, ‘I wouldn’t be into living here’.”

Not only are timber houses quick and cheap to build, but they’re highly energy efficient. Could they help solve the housing crisis? Tanya Sweeney reports

1 Remember that wood is a living thing: “It might take a little while to settle,” advises Trevor Lee. “You might have to get the internal doors adjusted after a while, and the manufacturer is often happy to do that at no charge.”

2 Consult with your architect about how much insulation you’d like in the roof according to your own personal needs: “I had 300mm put in, but it can vary,” says Trevor.

3 Tiny houses may be cost effective, but aren’t for everyone. “If you don’t like small spaces, well then ‘tiny homes’ may not be for you,” advises McMahon. “Living in a small home will force you to be organised as you will not have a lot of storage space.”

4 Flexible on location? Looking outside Dublin might strengthen your chances of securing planning permission. Dublin City Council has yet to grant planning permission for the wood cabins in the city, but permission has been granted in the countryside. “Find the land where you meet local needs for development,” says Vaidas Karpavicius of Loghouse.

5 To maximise the life of your cabin, re-stain the exterior every five years. Long roof overhangs, covered decks, and proper landscaping should be included into the design to keep water off the logs after they are installed.

Have you read our article: Windows For Log Cabins 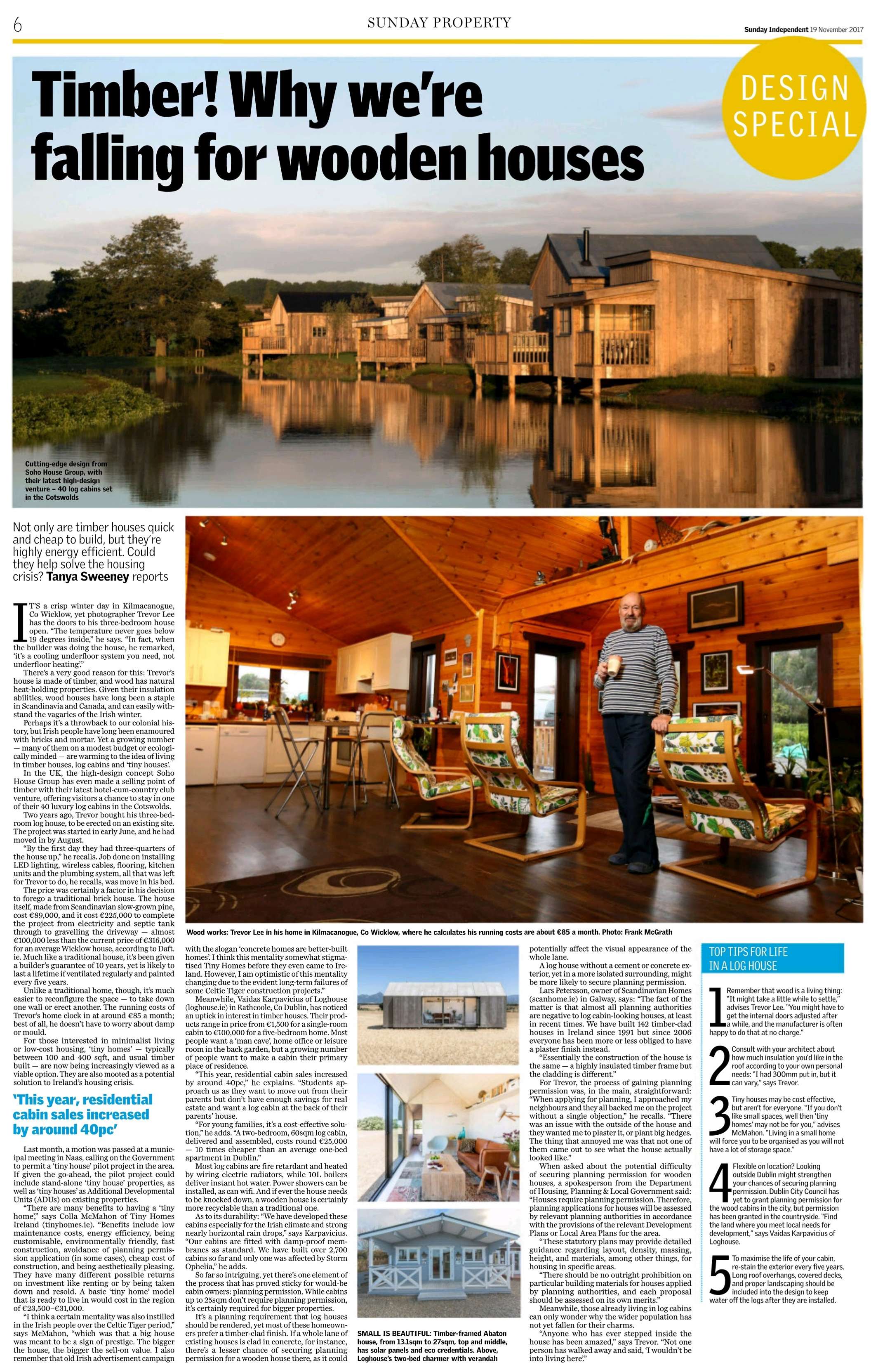